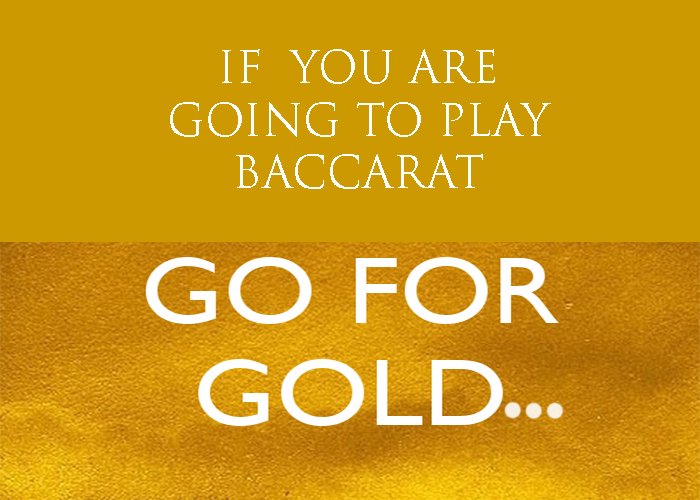 Let's talk about playing Baccarat like a multi-million dollar Wall Street investor. Then let's go one step beyond that. Let's take a look at how a simple 1% IMPROVEMENT in your Baccarat SKILLS & PROFITS can take you as a player from playing this game with a relatively small bankroll to the heights of a professional player with Baccarat earnings in excess of ONE MILLION DOLLARS.

Most players can not imagine earning over a million dollars playing Baccarat. That is understandable. Yet, it has been done by more than one professional Baccarat player. And we have all either seen or heard about it being done by a few Poker players, for sure.

So, that it CAN be done is not in question. The greater question is, "HOW COULD YOU DO IT?" Better yet, "How could you do it safely, with low-risk levels and with confidence that you are achieving that goal every time you sit down at a Baccarat table?"

Well, that is where the multi-million dollar INVESTOR comes in. Because he or she does not think like a card player. He knows THE VALUE OF SMALL, INCREMENTAL PROFITS. To him an added 1% or 2% profit from any investment is screaming! MONUMENTAL! HUGE!

He also knows that PLAYING WITH TOO MUCH RISK TODAY COULD COST HIM MILLIONS IN LOST INCOME TOMORROW. For example let's take a single $100 bill and look at it through the eyes of this wise investor, and an equally wise professional baccarat player.

They both know that if they ever found an investment where they could earn 1% a day that the "Actual Annual Value" of that $100 to them is $3778.07. When they look at their CAPITAL (bankroll) they do not see a $100 bill.

But wait! That is only 1/2 of this story. They also know that if they EVER rIsk that little $100 bill unnecessarily, and they lose it, THEY JUST LOST A POTENTIAL $38777 IN FUTURE INCOME. They did not lose $100 (Playing that one Baccarat hand at foolish risk levels) THEY LOST THE $100 AND they lost the $3778 AND they lost all of the additional money they might have earned on the $3778 the next year or two. WOW! That was some kind of very, very, very expensive hand of Baccarat.

Yet, it happens in the casino every day, and by some very good Baccarat players. They may have learned how to win at that table, but they keep missing the most important part of this story.

They could be million-dollar Baccarat Players in a few short years, starting with a reasonably small amount of Capital. Just imagine how quickly that could happen if they had 5, 10, 25 or 50 thousand to start with.

Now you know why I have stated publicly that: BACCARAT IS ONE OF THE BEST INVESTMENT VEHICLES IN THE FINANCIAL WORLD when played by a smart, investor- oriented, professional player.

That said, here are the simple steps for you, personally. It does not matter what other players do with their $100 bills.

B) Learn the simple, correct RISK RATIOS you should be playing at, like that million- dollar investor uses.

C) Have a step by step plan, with daily, weekly, monthly and annual PROFIT TARGETS.

If you are going to play, I say, GO FOR GOLD or go home.