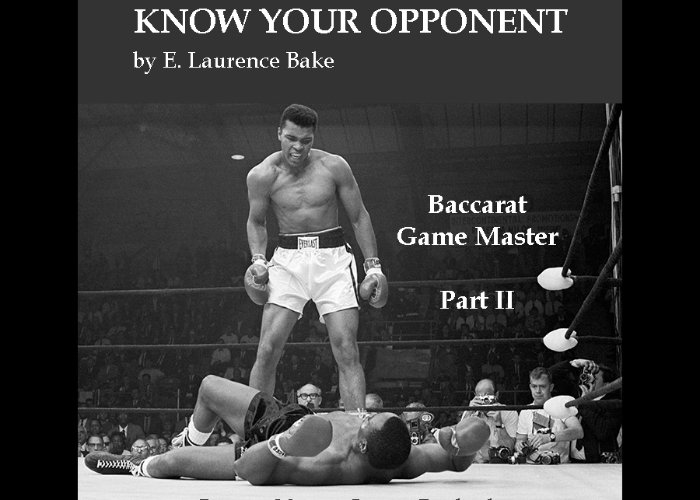 Hello everyone – thank you for the invitation to talk with you today. I did not know there would be so many of you. But that’s a good thing. So let’s talk Baccarat.

Life is a game. Football is a game and so is Baccarat.

Now every game has certain characteristics that make it a game. For example, there are players, some rules, a challenge of some sort (like who can get the ball over a certain line the fastest, or most often) and there are OPPONENTS.

There are more factors that make up a game, of course. But today I want to talk about one characteristic of games specifically. And that is the fact that every game, no mater which one we care to look, at will have someone (The Player) playing AGAINST someone or some thing.(The Opponent)

If there is no player and no opponent it is simply not a game. It may be an interesting activity, but no opponent = no game.

Now in the game of life we face various challenges and opponents each and every day. You get the job or get that car, or you win that pretty girl or guy or you don’t. If you cheat too much you may be penalized and the police are at the door, or even worse, it’s that pretty girl’s father with a gun in his hand. And that’s an OPPONENT if ever you want to meet one.

In Football you take on the other team and you play your heart out to beat them down to a weeping mess. It’s a game with rules and players and opponents and everybody loves a great game.

Then there is Baccarat. And suddenly, things are not so simple and clear. More specifically WHO OR WHAT IS THE OPPONENT, exactly? Who or what are you playing against that is going to determine if you win the game, or if you are left on the field watching the other team celebrating their victory. (and spending your money)

Is it the dealer, the casino, the player in the next chair beside you, or Lady Luck sitting up in the clouds, counting all of her money?

Well, unlike the game of life and football it is not a person, an organization, or that angry father who wants your girlfriend to marry lawyer. There is no red jersey or blue jersey to identify Team A or B. The fact is that in Baccarat you are not playing against a living, breathing, human being at all.

In Baccarat your opponent is a set of MATHEMATICAL REALITIES. That is exactly WHAT you are playing against. It is not a WHO it is a WHAT.

In other words, it is a cold, mechanical, mathematical reality that never gives an inch, and never compromises with you as an opponent. It says, “This is how it goes friend. 2 + 2 = 4, that’s the REALITY, that’s how it is and how it's going to be.”

That is the opponent you are facing each time you enter the casino, online or offline. And either you know your opponent and know how to defeat that opponent or you do not.

Too many players do not want to face that REALITY. And that is unfortunate, because the Mathematical Realities that exist in Baccarat are really not that difficult to understand. For example, if you know the other Football Team always moves a certain way, then you can devise strategies to overcome that REALITY and win the game.

Yes, I know Baccarat is not as simple as 2+2=4. And there is much more to it than 5-4=+1. That’s just a simple example of what I mean when I say, Mathematical Reality.

Understanding your opponent opens the door to victory in many ways. Another example is the mathematical fact that if you are – 1 unit in a game you can get into profit two different ways. You can flat bet 1 unit, win twice and you will be at a +1 profit. That takes two wins to achieve. Or you can bet 2 units, win that and you are +1.

And there you have it. Now you know what your real opponent looks like and acts like. It is uncompromising, unforgiving and relentless.

It never fumbles the ball. It never makes a mistake and gives you a chance to profit by that mistake. 2+2 will never add up to 3, no matter how much you hope and prey it will. It is as REAL as real can be.

And you had better get to know your opponent and know it is not human, it has no heart and no desire whatsoever to make you richer.

But that is the dark side. The bright side is that ANY GAME DEVISED BY THE HUMAN MIND CAN BE DEFEATED BY THE HUMAN MIND. Now that is a game changing REALITY you can rattle around in your head for a while. It’s not true because I say it is true. It’s true because YOU KNOW IT IS TRUE. And that’s why you keep coming back to the game of Baccarat.

Deep, deep down you sense, you suspect that there is a way to win. You keep telling yourself that there must a way to leave the playing field victorious. Well, the good news is that you are right.

No matter what the talking heads, mathematicians and amateur-experts say, there is a way to be PROFITABLE playing Baccarat. But it is not with prayer, wishful thinking and it is not with luck.

It is by UNDERSTANDING your opponent, knowing what it can and cannot do, then putting on your boots and going out onto that field and leaving it as a champion.

Because that’s what champions do, they create new REALITIES. And that reality is that they WIN.

Thank you for listening today, I hope this brief talk helps you on your way to the Baccarat success that you seek.